Shri Dhanwantri Ayurvedic College, a centre of excellence & state of art in Ayurvedic medical study and treatment, was established in 1975 by a group of philanthropists for the growth and development of Ayurveda in Chandigarh. The college offers BAMS (Graduate) and Post Graduate courses. It is located at Sector 46-B, Chandigarh. It has super-speciality Ayurveda services with modern facilities. The college is affiliated to Punjab University, Chandigarh. The intake capacity for BAMS is 50.

The Unani system was originated in Greece and the pioneering man behind the system was Hippocrates. Unani, the Indian system of traditional medicine had been practiced in India for a long time. It came to India by Arabs and Persians during the eleventh century, who worked and researched extensively on Greek philosophy. It got adequate patronage from the Delhi Sultanate. Since then, it is rooted here except for the British regime. Now, India is the leading country in the world in terms of Unani education, hospitals, and health care facilities.

Dr. Sarvepalli Radhakrishnan Rajasthan Ayurved University, Jodhpur is the first university of Rajasthan and the second one in India. The university-affiliated to 44 colleges and institutions in the fields of Ayurved, Homeopathy, and Unani. About 7000 students are studying in the university.

Initially, Siddha was an integral part of the Central Council for Research in Ayurveda and Siddha (CCRAS), but now the government has created a new research council for Siddha i.e. Central Council for Research in Siddha (CCRA). This shows the importance and relevance of Siddha medicine. Now, Siddha is no more part of CCRAS. Simultaneously, the governments are hiring many Siddha doctors and experts for its research council, national institute, and teaching institutions.

Naturopathy is a refreshing process and a cost-effective treatment modality, which tries to find out the very root cause of diseases by restoring harmony among various components of Naturopathy lifestyle- physical, social, emotional, spiritual, mental, and psychological. Nature Cure, being a drugless therapy is safe and enhances the sustainable and functional ability of the body. Since it is cost-effective and without any side effects, a large number of people have opted for nature cure therapies like massage, sunbath, hydrotherapy, mud therapy, diet therapy, etc. There is a great opportunity for jobs in the naturopathy field. 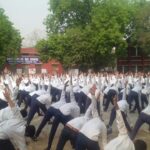 A career in Yoga Instructor

Yoga’s efficacy to control lifestyle-related disorders is unparalleled. Yoga is known throughout the world because of its simplicity and to a larger extent, it shows no side effects. Yoga and Yoga therapy opens many jobs in the field of research, academic, management, administration, hospital, health resorts, etc. The government has made it mandatory to have Yoga instructors in every school.