Home » Health » How the Beginners Should Do Headstand Pose (Sirsasana) Safely

Headstand yoga poses, though challenging to perform, can show negative impacts if performed incorrectly. However, on the other side, it has incredible health benefits. As per the ancient texts, it is known as the ‘King of asanas,’ but it seems to be over-estimation as all the asanas have their significance. It shows invigorating impacts from toe to head. It supplies well-oxygenated blood to the brain and is the single yoga pose that directly impacts the pituitary glands. It is pronounced as: ‘Shir-sa-asa-na.’

How to do a headstand pose safely

It is not advisable to practice Sirsasana in the following conditions.

The beginner shouldn’t think about duration; the focus should be on practice and perfection. As time passes, try to hold it for 10 to 20 seconds and gradually increase the duration. Those who have mastered the pose can maintain it for 20 to 30 minutes or even an hour.

Before starting the headstand yoga pose, you should ensure you know how to fall correctly. Even the practitioners, who have been practicing sirshasana for years, can fall. If you fall forward in the same direction as your face, you should fold the knees into the chest as much as possible. The impact on the floor should be sustained by the feet only. If you fall backward, that is, behind the head, then the back should be arched as much as possible. The impact again should be sustained by the feet. No part of the back should hit the floor before the feet.

Correct position of the head

There are many views on this. Some yoga experts say that the forehead must rest on the floor, while others say that the top of the head should rest on the floor. From my point of view and what I have learned from my yoga teachers and gurus, the best head position is midway between these two extremes. That is, the head should be placed so that a point midway between the forehead and the top of the head rests on the blanket.

Position of the hands and arms

Legs upwards shouldn’t be swung as it leads to imbalance. While raising the legs up, focus on control movement by contracting the back muscles and slowly readjusting the position of balance.

Returning to the ground

After attaining the final position, come to the starting position by doing the stages in reverse order. The body should be lowered slowly and with control. Body drop should be done slowly and systematically. It should be so that when the feet touch the ground, it makes no sound. 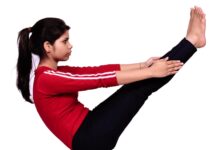